Blowback: The Costs and Consequences of American Empire 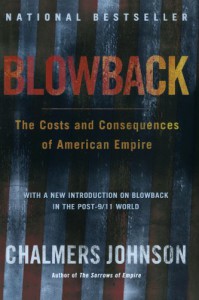 This is the second book I've read from Chalmers Johnson, and it was definitely another success. Technically, this is part of a trilogy of texts, and I read the second prior to reading this, though the books are not required to be read in any particular order. Taken together, the books paint a picture of a US in danger of losing its way, though by now it is more likely that it has already lost its way.

This book shows how the military structure and the defense agenda have divorced themselves from America's interests. Our military goals do no lead to stability in the international system, nor are they truly about protecting the US or its allies. Worse yet, these goals have led us to economic policy that directly weakened our economy and hurt Americans while ensuring that poverty around the world would increase. It's difficult to see how the US can square its stated ideals of freedom, self-determination, and the rule of law with direct support for dictators and autocrats, imposed "one-size-fits-all" economic models, and a rejection of any liability for itself under international legal norms.

There should be two main take away points from this reading. The first is that America and its institutions (including the IMF) seem to lack an essential curiosity to understand non-American cultures. The IMF frequently imposes and American inspired economic model on the countries it "helps," yet as Mr. Johnson has noted, the IMF cannot point to even one notable success for its policies. Recently, the IMF itself has noted that its policies are often counterproductive, though it refuses to actually reform them.

The second main take away is that America's increasing reliance on military might and ideological purity, as divorced from its own actions, have lessened the credibility of the nation and made it harder for America to maintain its standing. As our citizens fall further behind the industrialized world and, eventually, cede economic superiority to other nations that have invested in their economic infrastructure, America will find itself with fewer allies because of its belligerent stances. Prior to this, the country will have to deal with violent uprisings and political discontent in its satellites. Doing so is costly both in terms of money and it America's image. Our commitment to remaining the "lone superpower" is, in short bankrupting us and insuring our eventual decline.

Despite being written prior to 9/11, this book still offers some great insights into America's neo-colonial project.
Tweet