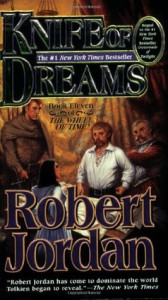 A much better installment than the previous few. The resolution of Perrin's storyline is thankful as it was dragging to an unnecessary extent. I still like Perrin as a character, though I feel he is largely wasted on mostly self-contained story lines that would have better fit in a spin-off series. Despite the lack of significant advancement of Egwene's storyline it feels like much is accomplished. It is interesting to see the development of her character, though I think more nuance with regard to Elaida would have made the story more interesting. As it stands now she is largely an incompetent villain for no reason. Considering how long she has lasted as an Aes Sedai and as an advisor to Morgase, I would expect her to be at least a bit more competent than she has been.

Mat's story has an excellent resolution for the sub-plot he was involved in. It was great to see him back to his own element while still evolving as a character. While I was disappointed in the short length of Rand's story line, it did involve a minor pay-off, though it feels as though there will be some unfortunate rushing to catch him up to where he needs to be. I'm happy that Elayne's story line is finally resolved, mainly because it was aggravating, unnecessary, and will hopefully lead to less of her POV chapters. I cannot fathom how she is supposed to be a good ruler. She was supposedly educated in warfare, but almost loses Caemlyn because her brilliant idea for catching the Black Ajah is to rush into danger without sufficient information, and to do so with at least one sister she knows is Black Ajah. She leaves herself vulnerable and requires the shifting of her army to save her, almost costing her the city and definitely throwing away the lives of the men sent to rescue her. Her rescue and the ultimate ending of the siege are due entirely to luck and the foresight of others. Seriously, she shouldn't be allowed to hold sharp instruments much less run a country.
Tweet